'Lucky' the owl to be released 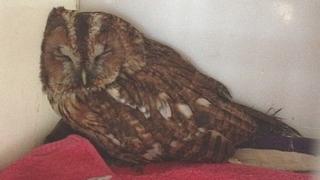 A tawny owl named 'Lucky' after surviving a 300 mile journey stuck on the front of a train, is to be released back into the wild.

Lucky was rescued from the train at a freight terminal in Crick in Northamptonshire.

It is thought he had been clinging on since the train set off from Mossend, near Glasgow.

After spending nearly 3 weeks at a wildlife sanctuary, he's made a full recovery and will be released today.