Seven portions of fruit and veg "better than five" 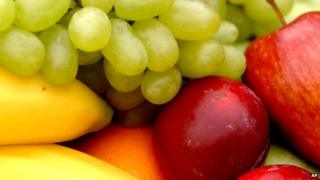 Eating five portions of fruit and veg a day can sometimes be tricky.

But a new study has suggested we should be eating seven or more portions to stay healthy.

Researchers from University College London studied more than 65,000 people over seven years and found that while eating five portions a day was good, eating seven was better.

The government says its "five-a-day" advice is sufficient and that many of us struggle to achieve even this.

The study, which 65,226 men and women took part in, found the more fruit and vegetables people ate, the healthier they were.

Fresh vegetables had the strongest protective effect, followed by salad and then fruit.

The five-a-day message is based on advice from the World Health Organization.

It highlights health benefits of getting five 80g portions of fruit and vegetables every day which can include fresh, frozen, canned, dried or pure juices.