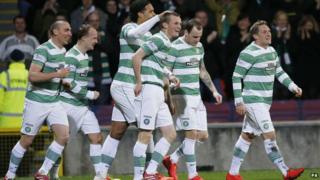 A 5-1 away thrashing of Partick Thistle was more than enough to start the wild celebrations.