City brush past United to eye up title 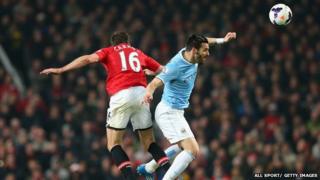 An Edin Dzeko double helped Manchester City beat bitter rivals Manchester United and close in on Chelsea at the top of the Premier League.

City eased to a 3-0 win over their local rivals to keep their title hopes alive.

Dzeko's two goals, one after just 43 seconds, stunned the Old Trafford crowd, with a late Toure strike wrapping the game up.

City are now within three points of Chelsea and have two games in hand.