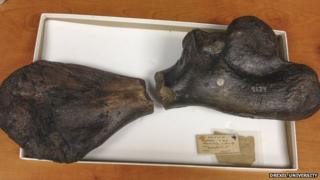 Two parts of a fossilised bone, found more than 160 years apart, have helped scientists predict just how big one of the largest sea turtles in history was.

The first bone was unearthed way back in the 1840s but amazingly a matching fossil has just been discovered.

It's helped scientists conclude that Atlantochelys mortoni, was around three metres in length, that's about a metre taller than most door frames. 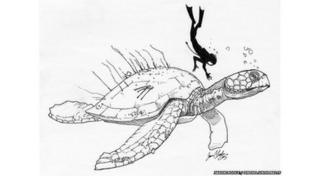 jason poole / drexel university
This artist's representation gives a sense of how big A. mortoni was by modern standards.

The discovery was made by researchers in Philadelphia, USA.

"When we put the two halves together, we were flabbergasted," said Dr Ted Daeschler, from the Academy of Natural Sciences at Drexel University in Philadelphia.

"We said, 'no - that can't be!' We even turned them around trying to show they didn't match, but they're obviously supposed to be together," he added.