Beckham unveils plans to build a stadium in Miami 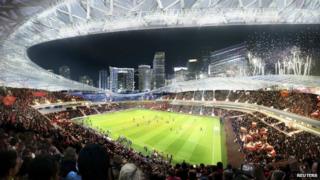 Reuters
What the stadium will look like when it's finished.

The open-air stadium will be built on Miami's waterfront in an area known as PortMiami, which hosts the world's busiest cruise ship terminal.

He's excited about it but says there are still a lot of decisions that need to be made.

It's understood the team could start playing in 2016.