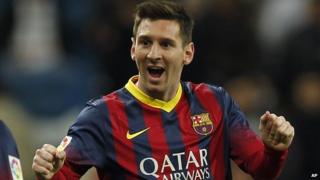 El Classico is the name given to the famous match between Spain's two biggest clubs, Barcelona and Real Madrid.

The victory took Barca within a point of Madrid at the top of La Liga.

It was Messi's second hat-trick in a row, making him the second highest scorer in La Liga history as well.