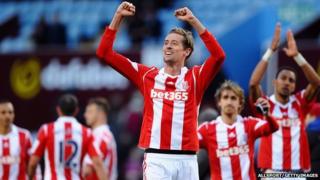 It was goals galore in the Premier League this weekend.

A staggering 42 goals were scored in total, one short of the record set in 2011 for most goals scored over a weekend.

Tottenham Hotspur came back from two goals down to beat Southampton 3-2.

Stoke also came from behind to beat Aston Villa 4-1 - claiming their first Premier League away win since August.

Manchester United beat West Ham by two goals, as did Hull in their match against West Brom.