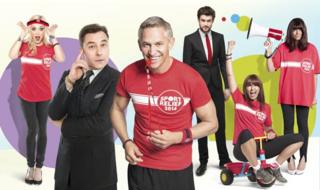 It's show-time! After weeks of gruelling challenges for this year's Sport Relief, it's time for the star-studded TV show.

Football pundit Gary Lineker and TV host Davina McCall are among the many presenters on tonight's big programme.

The show raises money which will all go to help poor and disadvantaged people in the UK and around the world.

Last time, the show raised £50.4 million and the stars are hoping to beat that this year.

Top BBC radio DJ Jo Whiley completed a 26-hour stint on a treadmill on Thursday, earning a £260,000 donation by the band Coldplay.

CBBC's Radzi swam a mile across a freezing cold lake in Cumbria.

Davina McCall raised more than £750,000 by running, cycling and swimming from Edinburgh to London in just seven days.

Radio 1 host Nick Grimshaw completed a 12-hour bike ride after he, along with other celebrities, cycled more than 1,000 miles and raised more than £115,000.

The telethon kicks off tonight on BBC One at 7pm, and includes: