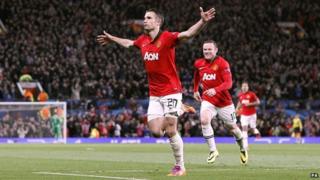 David Moyes' side won 3-2 on aggregate which takes them into the Champions League quarter-finals.

Van Persie's first goal came from a penalty midway through the first half at Old Trafford.

Then just before half time he scored his second and levelled the tie overall.

He sealed the deal with a free-kick in the second half.

Supporters then faced a tense forty minutes as United held on for the win.