Comments: Your messages for the rugby teams playing in the Six Nations 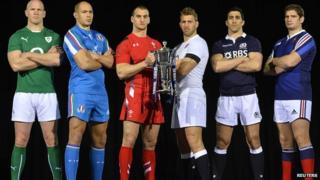 Since the start of February the rugby teams from England, Scotland, Wales, Ireland, France and Italy have been battling it out in the Six Nations tournament.

And this weekend the competition comes to an end. Wales won last year but this time around they haven't done as well. Instead leading the table are Ireland and England, both with very good chances of winning overall.

Like the men's tournament, the Women's Six Nations comes to an end this weekend with three countries in the running to take the title.

Have you been following the Six Nations tournament? Do you have a message for your rugby team?

Your good luck messages for the rugby teams

I really hope Italy wins because I am half Italian and half American.

Good luck England! You're the best team ever!

Good luck to England, we can do this! And to the other teams as well!

Good Luck to England. My granddad and my grandma will be cheering for you all the way!

Come on Ireland! I wished that Wales would win, but now it's only England and Ireland. Celts, let's win!

Come on England, let's thrash them!

You are the best rugby team, I hope you get another trophy.

Good luck England - do it for us and win it for our country!

England for the win. Come on ENGLAND!

My sister and I are going to watch the match and we are going to be roaring the house down because we will be screaming for Ireland. Best of luck Ireland, you can do it!

Brian you are the best player I have ever seen. I hope you score a few tries. I hope Ireland win. Come on Ireland.

Come on England! I hope you do well. Let's go and win the Six Nations!

The Welsh have done very well this year in my opinion, but I think that the Irish will win.

Good luck to Ireland and England too.

Well I'd like to say good luck to both England and Ireland as my dad's side of my family is Irish and my mum's is British.

Keep doing what you're doing England.

I thought Wales could win the Six Nations but now either England or Ireland will win. All hopes for the Irish.

Good luck! I can't wait to watch you guys! I hope all the teams do well, especially England!

Good luck to England as I love rugby and they are the team I support.

Come on Scotland, my granddad will be so proud.

Good luck to Wales - I hope they can finish with a big win!