Crimea votes on whether to rejoin Russia 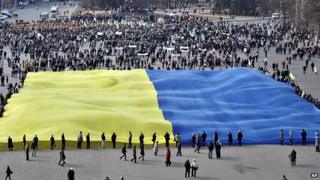 The people of Crimea, in southern Ukraine, are today voting on whether the region should stay part of Ukraine or rejoin Russia.

Most of the people living in Crimea believe they're Russian and voters are expected to support leaving Ukraine.

But the vote has been called "illegal" by the government in Kiev and by countries like the United States.

World leaders want Russia to stop its action in Crimea.

During trouble there last month the area came under Russian control and the Russian army moved in.

The vote comes during a violent few months for Ukraine. There have been some massive changes in the country, including the removal of President Viktor Yanukovych from power.