GB's curlers through to last four at Paralympic Games 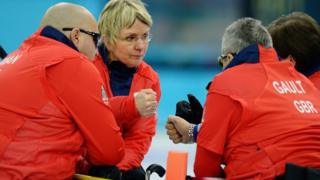 GB's curlers have made it through to the last four of the Winter Paralympic Games - even though they lost their last match against China.

Russia's win over Slovakia means GB go through to the semi-finals.

GB were pretty poor throughout, but won't worry about that as they're just one win from the final.

They will now take on Russia on Saturday, which starts at 5:30 in the morning UK time!