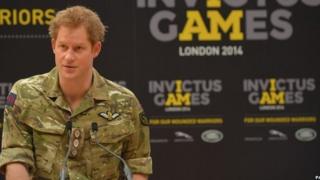 Prince Harry has helped launch a UK sporting event for injured members of the armed forces.

The prince said the competition would help to celebrate the achievements of those who fought for their country.

He has been working to bring the event to the UK after seeing something similar in the US - the Warrior Games.

"I have witnessed first hand how the power of sport can positively impact the lives of wounded, injured and sick servicemen and women in their journey of recovery," Prince Harry said.

"The Invictus Games will focus on what they can achieve post-injury and celebrate their fighting spirit through an inclusive sporting competition that recognises the sacrifice they have made."

The prince said he believed the competition would have a "long-lasting impact" on the well-being of those who have "served their nations so bravely".