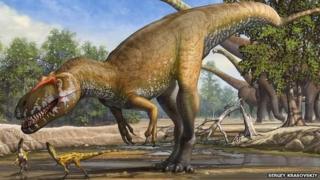 Scientists in Portugal have identified what they think may have been the largest predator ever to roam across 'Europe'.

Fossil bones from the dinosaur were pulled from a cliff at Praia da Vermelha just north of Lisbon.

It's official name is Torvosaurus gurneyi, and they believe it would have been 10 metres in length and weighed between 4-5 tonnes, with 10cm teeth.

The scientists published their findings in a journal called Plos One.

The group behind the study say the T. gurneyi was a two-legged, meat eating theropod, similar to the Tyrannosaurus rex,

"The difference in age is striking - it's 80 million years", Prof Octavio Mateus, who co-authored the report, said.

"So, when T. rex walked on Earth, Torvosaurus was already a fossil," he added.

Scientists have now unearthed a number of body parts belonging to Torvosaurus from Portugal's fossil-rich Lourinha rock formation. These specimens even include eggs and embryos.

They say the Portuguese animal is distinct from the Torvosaurus already known from North America.

That fossil "cousin", known as Torvosaurus tanneri, was found in rocks of similar age.

It means that both animals must have shared a common ancestor deeper in time, before the Atlantic Ocean was fully opened.

"One hundred and fifty million years ago, Portugal was already separated from North America and this meant the mechanism of speciation could occur," said lead author Christophe Hendrickx. "And this is why we have a new species of Torvosaurus in Europe."

One of the most impressive features of the T. gurneyi is its teeth - they are blade-shaped and measure more than 10cm long.

This suggests it must have been at the top of the food chain when it stomped around that part of the world. 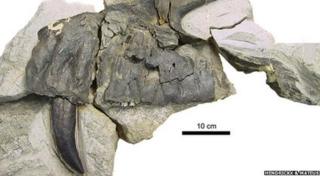 Hendrickx & Mateus
The upper-jaw bone, or maxilla, has helped scientists to get a clear idea about how big the creature was

"Besides dinosaurs, we had turtles, crocodiles, those flying reptiles we call pterosaurs, and also small mammals," Mr Hendrickx said.

Prof Mateus added: "This was an area with a lot of rivers, a lot of fresh water; and a lot of vegetation. So, it would have been good for herbivores, and with herbivores come some carnivores like Torvosaurus."

Although a record-breaker for terrestrial Europe, Torvosaurus is not the largest predatory dinosaur known to science.

Carcharodontosaurus, Giganotosaurus and Tyrannosaurus from other parts of the world were all bigger land animals.

And of course there were marine predators in the Jurassic, such as plesiosaurs, that would have rivalled it for size.

The largest known herbivore in Europe was probably a sauropod from Spain whose bones suggest it weighed in more than 40 tonnes.