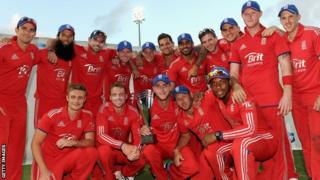 Joe Root scored his first one-day international hundred despite pain from an early blow on his thumb.

It is England's first limited-overs series triumph since February 2013.

For the fans it was some much-needed cheer after the crushing defeat at the Ashes tour in Australia.

There are three Twenty20s in Barbados, with the first one happening on Sunday.

After that both teams head to Bangladesh for the World Twenty20.