Comments: How do you eat your pancakes? 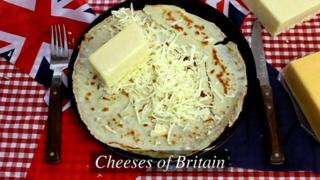 It's Shrove Tuesday and we know many of you will be tucking into pancakes later - but what will you top them with?

Are you partial to sugar and lemon? Or more of a chocolate sauce fan?

Watch: How to make the perfect pancake

Let us know by leaving us a comment - or send us your pancake pics to newsroundpix@bbc.co.uk!

Thanks for all your comments - we had loads! It sounds like you all had some amazing concoctions - here's some of those you sent in.

This year I had lemon and cinnamon and another one with Nutella and chopped banana. They were the best.

I have mine with peanut butter but my dad has mushy peas.

On my pancake I have chocolate spread and marshmallows. Delicious!

I like sticking on anything that I can put my hands on that's edible.

I like my pancakes with goat's cheese and honey! I know it sounds disgusting but it's really nice.

I absolutely adore pancakes with golden syrup and then folded into a triangle like crepe.

I eat mine with chocolate spread all over, then I make a face with Haribo and other sweets.

I have chocolate spread on mine, fold it in half and fill it with cream.

I eat mine with chocolate and banana. It sounds disgusting but tastes out of this world, yum yum.

I normally put lemon and sugar on my pancake, but this year I've put three different types of cheeses on (cheddar, parmesan and camembert) with spaghetti hoops to finish.

I like my pancakes with chocolate spread and ice cream too. They taste delicious!

I eat mine with Nutella.

My favourite thing to have on my pancakes is paprika - I know it sounds weird but it's delicious! Mmmm!

I eat my pancakes with honey but my dad eats his with banana and honey yuck!

I put loads of chocolate buttons on my pancakes with chocolate spread on and wait for the chocolate to melt. It's really chocolatey and really yummy.