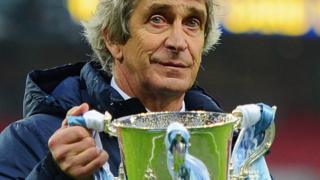 Manchester City manager Manuel Pellegrini says he hopes the club's Capital One Cup final win could be the start of a treble trophy success.

City beat Sunderland 3-1 at Wembley to claim the first silverware of the season.

Afterwards Pellegrini said he was hopeful his team could now go on to win the Premier League and FA Cup.

They play Wigan in the FA Cup quarter finals and are currently fourth in the league, with two games in hand.

He said: "We are the only club with the chance to try to win all the competitions. We are going to try although we know it is not easy."