Comments: Which sport, real or fictional, do you want to try? 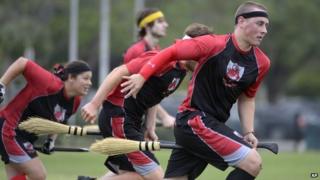 The fast and furious wizard sport of Quidditch became famous thanks to the Harry Potter movies.

Now the muggles version of the game is one of the fastest growing team sports in the UK.

It was adapted for humans in 2005 in America and it's pretty much the same without the flying. It seems we are pretty good at it too - Oxford is home to the European Quidditch champions.

We want to know which sport - real or fictional - you fancy having a go at, and why.

Perhaps you have a game you'd like to invent!

You let us know what you thought.

I would love to play Quidditch because I am a full-on Harry Potter fan and I would be a beater because I always play in defence!

I would like to try falconry because you get to work with birds of prey and you also get to see how they hunt.

I would like to try out table tennis because I want to experience the feeling and it is a great way to stay fit.

I would love to have a go at the skeleton from the Winter Olympics. Just look at how fast they go!