The new planets found are all in multi-planet systems, orbiting 305 stars.

95% of the planets are smaller than our Neptune, which is four times the radius of the Earth. 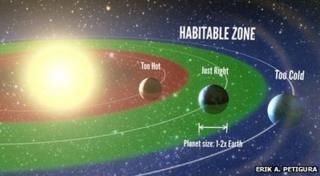 Erik A. Petigura
Planets have to be the right distance from a star to make them habitable.

Four of the new planets orbit a star in a 'habitable zone' - a region around a star where water can remain as a liquid, like Earth.

Habitable means people could potentially live on them.

Although scientists know some details about the discovery, the planets are hundreds of light-years in the distance, and this is too far away for very detailed investigation. 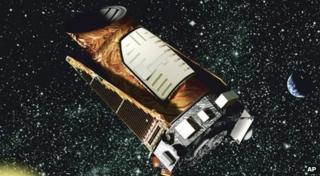 AP
An artists impression of the Kepler space telescope

The Kepler space telescope was launched in 2009 on a $600m (£360m) mission to discover if Earth-sized planets in our Milky Way Galaxy could support life.

Faulty parts reduced what the telescope could do last year, but not before it had identified thousands of possible worlds in a patch of sky in the constellations Cygnus and Lyra.

Douglas Hudgins from Nasa's astrophysics division said: "This is the largest windfall of planets that's ever been announced at one time,".

"Second, these results establish that planetary systems with multiple planets around one star, like our own Solar System, are in fact common.

"Third, we know that small planets - planets ranging from the size of Neptune down to the size of the Earth - make up the majority of planets in our galaxy."

Scientists still have more data from the Kepler space telescope left to examine and it's hoped more exciting discoveries will be made.