Bananas 'are too cheap' say farmers

You might not know it but Bananas are big business.

They're Britain's favourite fruit, and we go through around five billion each year.

But while you can pick one up at your local supermarket for pretty cheap, the farmers who grow them say it's getting harder to sell them for the current low prices.

Farmers are now calling on supermarkets to increase banana prices.

Renwick Rose, who represents farmers in St Lucia in the Caribbean, said that while banana shelf prices had dropped, production costs had doubled.

"It's really just unsustainable. People cannot continue to be producing bananas and getting the returns they are getting."

However the British Retail Consortium, which represents supermarkets and retailers in the UK, said: "producers and customers are getting a good price" and that the "price of the bananas are agreed with the producers".

The Fairtrade Foundation is an organisation that campaigns for fair trading between farmers and retailers.

They are now campaigning to raise the cost of bananas in the UK to help banana farmers in places like Ghana, Colombia and Ecuador. 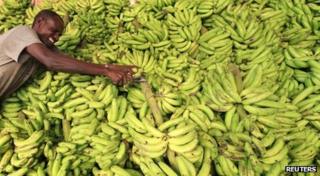 Reuters
The Fairtrade Foundation said the price of bananas has almost halved in UK supermarkets over the past 10 years, while production costs have doubled.

It said that small farmers and plantation workers were "collateral damage" in a supermarket price war. Supermarkets say they have to meet customer demand.

Michael Gidney, chief executive of the Fairtrade Foundation said: "We are calling on the government to investigate... because it's unfair.

"A product that is worth billions of pounds in global trade relies on poverty-level income for the people who grow it."

Down to the supermarkets

However, a government spokeswoman for the Department for Business, Innovation and Skills, said: "We fully recognise the positive impact that the fairtrade brand can have on consumers' shopping habits and in raising awareness of supply chain issues.

"However, it is not our policy to get involved in price-setting. The price that people pay at the checkout is down to the supermarkets.

Some supermarkets only sell fairtrade bananas, but campaigners like Mr Gidney says more still needs to be done.