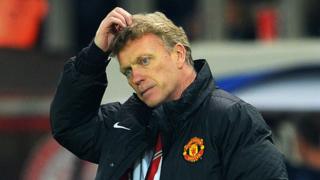 At this stage of last season, Manchester United were 12 points clear at the top of the Premier League and well on course for their 20th league title.

This season they're 6th in the league and have just lost 2-0 to Olympiakos in the last 16 of the Champions league - leaving many fans, as well as Manager David Moyes, scratching their heads.

But this is the same side that previous manager Alex Ferguson led to the top time and time again.

So, what's going on? Is it bad luck or bad management? Do they need new players? A new formation? What can they do to sort it out?

Thank you for your comments. This chat page has now closed.

Get Alex Ferguson back and keep the formation 442 or 523

I'm so so so upset by what is happening at Manchester United. I think the only way to fix the club is to bring in a massive defender to stop all the goals going in. Rooney as manager too.

I think it's the manager, because before when it was Alex Ferguson they were at the top.

I think Manchester United should just sack David Moyes. They should sell Van Persie and Rooney as soon they will be struggling to stay at the top of their game.

David Moyes is out of his league. He has never managed a team gunning for trophies, so this weakness is showing. A popular saying goes, "You can't give what you don't have." The Board should be courageous enough to own up to their mistake in appointing Moyes and show him the way out.

The only reason Manchester United are losing is because of David Moyes.

My family supports Man Utd and we think it's bad luck.

It's not the manager, it's the team itself, they need a better midfield, and another player like Carrick to keep passing the ball around.

I think it's the manager, because he's not been doing it for as long as Fergie. Also, the players aren't playing as well as they could.

I'm a Liverpool fan and I know that Man Utd are not terrible, but this season has just been terrible. Whether it's the new manager or the clash with the players I don't know, but United really need to up their game if they want to have at least a chance of making the top four.

I think it is all David's fault. He isn't good enough to manage the former champions. He should have stayed at Everton. He has made a few successful signings like Mata, but Fellaini isn't good at all. Manchester United need to be back to old standards.