Scientists think they can now explain a massive graveyard of whale fossils discovered in Chile.

The fossil remains are thought to have been there for more than five million years.

It's now thought the creatures died after eating toxic algae, then got washed up onto the flat sands.

The report, published in a Royal Society journal, says it's likely there were four different groups of whales that ended up there over time.

As you can imagine a single whale skeleton is pretty big, so imagine the amazement when a team found the skeletons of 15 whales in just 15 days.

The bones of sharks, dolphins and seals were also discovered, during construction work for a new road in North Chile in 2011.

A team of experts were given just two weeks to complete their field studies before work started on the road again.

The team set about recording as much detail as possible, including making 3D digital models of the skeletal remains and then removing bones for further study in the lab. 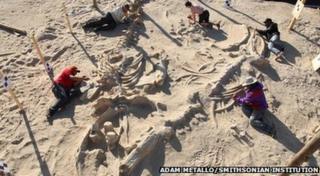 Nicholas Pyenson, from the Smithsonian National Museum of Natural History said: "We found extinct creatures such as walrus whales - dolphins that evolved a walrus-like face. And then there were these bizarre aquatic sloths."

The researchers say the best explanation for the graveyard is that these animals were all poisoned by the toxins that can be found in some algae.

It's thought prey eat the algae and become poisonous, then when the whales eat the prey they can die pretty quickly.

"All the creatures we found - whether whales, seals or billfishes - fed high up in marine food webs and that would have made them very susceptible to harmful algal blooms," said Dr Pyenson.

The researchers believe the coastline at that time acted as a funnel, sending the whales' bodies into an area where they were lifted on to sand flats just above high tide, perhaps by storm waves.

They were then preserved there for millions of years.