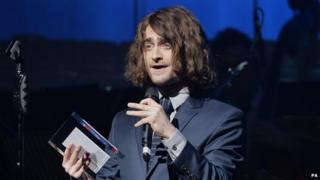 Daniel Radcliffe's hair caused quite a stir at a recent award ceremony.

The Harry Potter star showed off his new shoulder-length bob at the awards in London.

He won best actor for his performance in The Cripple Of Inishmaan, but it was his hair that stole the limelight!

The new do has been created using hair extensions and it's all for his new role as Igor in the film, Frankenstein.