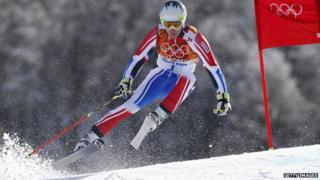 Today is the last day of competition at the Sochi 2014 Winter Olympics and tonight the Games will be rounded off with the closing ceremony.

What's been your favourite moment from the Winter Olympics? Perhaps it was when Jenny Jones won Team GB's first medal of this year's Games or when Lizzy Yarnold went hurtling to victory in the skeleton?

Maybe it was the curling which got you glued to the screen? Or the spectacular jumps and close photo finishes?

Whatever your favourite moment has been from the Winter Olympics get tapping your fingers and send us your comments!

My favourite moment was the figure skating, even though we didn't do very well! I loved watching the skaters glide elegantly across the ice. Go Team GB!

My favourite moment of the Sochi Olympics was watching Yulia Lipnitskaia in the team event for ladies figure skating. She helped Russia win the gold. She is my role model, as she is only 15 and she shows that you can do whatever you want as long as you are prepared to work hard.

My highlight was the curling because I never knew what it was until a few days ago.

I really enjoyed when Great Britain won the gold medal. That was a moment to remember.

My favourite parts must be the ski cross because there are so many jumps and bumps to go over as well as the skiing itself.

I loved the Winter Olympics, especially the curling because Team GB won medals and it was the first time the men won a medal since 1924.

My favourite highlight of the Olympics would be the bobsleigh because it's a very dangerous thing because of the speed they go and the people who did it must be very proud.

I liked the curling because Britain got silver in the men's and bronze in the women's so we did very well to get on the podium two times.

My favourite sports in the Winter Olympics have been the snowboard cross and the slopestyle snowboarding because there were lots of thrills, spills, photo finishes and drama.

I loved the men's curling especially the semi-finals but couldn't watch the final!

My favourite event was the women's downhill in skiing because Switzerland and Slovenia were joint first place and it was weird seeing them stand on the exact same podium.

I love the GB curling teams and I would love to do what they do! I am so happy that they all got a medal! I don't have a favourite from the team, I love them all! Well done for getting a medal - it isn't easy at all!

My favourite moment was when Lizzy Yarnold received a gold medal for the skeleton! I thought it was really inspiring.