Dog owners often say their pets can understand them. A new study suggests they could be right.

By placing dogs in a special machine called an MRI scanner, scientists found that a dog's brain reacts to voices in the same way as a human brain.

Eleven pet dogs took part in the study and training them took quite a while! 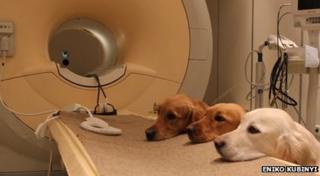 Dr Attila Andics, from the University in Budapest, said: "There were 12 sessions of preparatory training, then seven sessions in the scanner room, then these dogs were able to lie motionless for as long as eight minutes. Once they were trained, they were so happy, I wouldn't have believed it if I didn't see it."

The team also looked at the brains of 22 human volunteers in the same MRI scanners to compare. 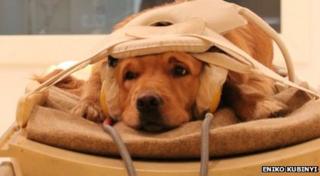 Researchers found that the human brain reacts to emotional dog noises like whimpering or angry barking in a similar area of the brain called the temporal pole. The scientists played the people and pups 200 different sounds, from car sounds and whistles, to human sounds and dog noises.

Dr Andics said: "We know very well that dogs are very good at tuning into the feelings of their owners, and we know a good dog owner can detect emotional changes in his dog - but we now begin to understand why this can be."