Comments: Are some sports more suited to girls? 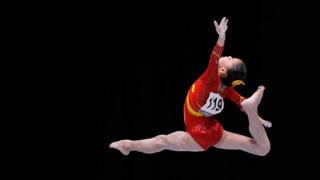 A member of the Government has said that girls should be encouraged to take up 'feminine' sports like cheerleading or rounders to keep them interested in sport.

Helen Grant, who is in charge of sport, thinks that some girls are put off activities like football because they think they are 'unfeminine' - which means not very 'girly'.

She thinks more should take up sports like ballet, gymnastics, roller-skating or rounders, to keep them active. But is it fair to say some girls would find 'feminine' sports more appealing?

We want to know want you think - let us know your comments by filling in the form below.

Girls should be able to play any sport they want. If they don't play a sport at all, then they obviously just don't like sport, whether it's thought 'feminine' or not! I know girls who play netball and hockey at school and they aren't particularly tomboyish, as well as the tomboys who play football. Basically, it should be up to them!

I think girls and boys should not be stereotyped and not be judged by what gender they are, however I strongly think that both genders should be encouraged to participate in any sport that they enjoy.

It really doesn't matter if you are a girl that plays football or a boy who dances ballet. Personally, I prefer football and tennis to gymnastics even though I am a girl.

Some sports seem like they're more suited to girls or boys, but when you think about it, there are Olympians and Paralympians of both sexes in all sports.

I think that girls should be encouraged to take up 'feminine' sports like ballet. I know I'd like to try it!

I do play football but I don't think I'm unfeminine.

I think girls should be able to choose which sport they play and should not think they are too girly for things like football!

I think that if your interested in any type of sport, whether it is gymnastics or football, I don't think it matters. If you enjoy a sport you should go for it.

I think that everybody should just be able to do whatever sports they enjoy.

I do gymnastics, roller-skating and ballet, I also like playing football but I prefer the other three because I feel like I fit in better.

I don't think that girls have to only play feminine sports because I play football every Wednesday and it is really fun! I do like Gymnastics but if we play more active games we could be more active!

It doesn't matter what sports people do as long as they are enjoying it, they are fine.