Baby turtle washed up after storms 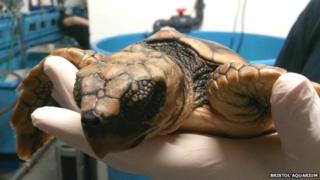 A baby turtle washed ashore during the recent storms is recovering in a special tank at Bristol Aquarium.

The loggerhead turtle was found by a member of the public at Freshwater West in Pembrokeshire.

Nicknamed 'Stormy', the turtle is 17cm (6.7in) long and is thought to have begun life in the Caribbean or Mexico.

Bristol Aquarium, says Stormy "was very poorly indeed" when he arrived, but they are "cautiously optimistic" he will make a full recovery.

The man who found Stormy last Thursday contacted a local animal rescue group which gave the turtle some treatment before transporting him to Bristol on Friday. 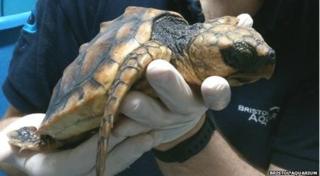 Young loggerheads migrate with the warmer waters of the Atlantic circulating in a current of water known as the North Atlantic Gyre which is rich in their favourite food of jellyfish and squid.

But, it is thought, on this occasion a severe storm pushed the baby turtle further and further north.