Olympic bronze for the women's curling team in Sochi 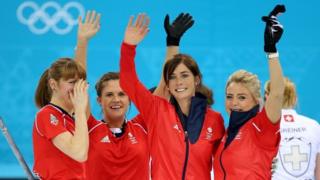 They beat Switzerland 6-5 to take a spot on the podium.

This takes the Team GB medal count to three, guaranteeing an equal record number of medals ever earned by Great Britain in the winter games.

Britain's men will play Canada in the gold medal match tomorrow - and will win either a silver or a gold.