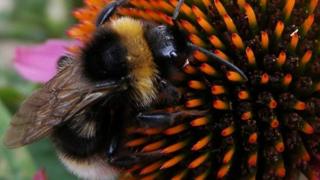 Bumblebees could be more at risk than first thought, according to a new report.

The bumblebee population is already declining, but researchers say they've now found evidence the species can suffer from diseases carried by honeybees.

The researchers said: "We cannot say it definitively, but the most likely explanation is that the honeybees are acting as the source of the virus for the bumblebees."

The team researched 26 different sites all over Great Britain and found evidence of bumblebees affected with a range of symptoms.

They think this might be happening in other parts of the world.

Beekeepers are being told that they should they should keep their honeybees as free from disease as they possibly can.

Around the world, the number of bumblebees has dropped massively, experts say it's because of a loss in their natural habitat.

Environment campaigners like Greenpeace warn that it's crucial to save bees from dying out: "Bees make more than honey - they are key to food production because they pollinate crops.

"A third of the food that we eat depends on pollinating insects... In Europe alone, the growth of over 4,000 vegetables depends on the essential work of pollinators."