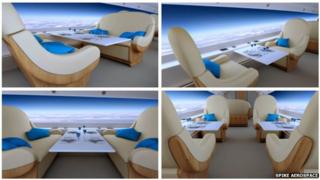 A super-fast passenger jet being built will replace its windows with screens displaying the world outside.

Windows on planes cause 'drag' which slows them down, but without windows this jet could easily reach supersonic speeds.

The jet will be capable of travelling at over 1,100 mph and will get passengers from London to New York in half the time it takes normal planes.