Major clashes between police and protesters in Ukraine 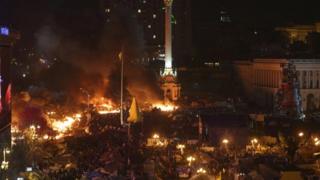 There's been a series of violent clashes in Ukraine's capital Kiev, between police and anti-government protesters.

Riot police have been firing explosives, trying to evict people from the main protest camp.

Protesters have set tires and tents a light to hold them back.

At least 25 people have died, nine of which are police officers, according to Ukraine's health minister.

Hundreds of people have been taken to hospital.

Ukraine's President Viktor Yanukovych blames the opposition leaders for the violence, while protesters blame the authorities.

Hundreds of thousands of protesters, who want the president to resign, have been camping out in the central square in Kiev since December.

But these latest clashes have been described as the 'worst violence' since the unrest began.

Some people are angry because the government decided not to sign a deal with the European Union, which would give Ukraine closer ties with Europe, something they believe would give Ukrainians a better life.

But President Viktor Yanukovych, and many other Ukranians, want to remain close to Russia, and think signing an EU deal would put this at risk.

Since then there has been a tug of war over how the country should be governed.