City and Barca ready for face off

The Champions League returns tonight, and it doesn't get any bigger than Manchester City v Barcelona.

City are taking on Four-time European champions Barca in the first leg of the last 16 match at the Etihad Stadium in Manchester.

Barcelona and City are two of the highest scoring teams in Europe this season with City finding the net 68 times in the Premier League.

The two teams have never played each other in a competitive match before.

What are the experts saying?

Chelsea manager Jose Mourinho has wasted no time in getting involved and believes that Manchester City will face "the worst Barcelona of many, many years"

Meanwhile Barcelona defender Gerard Pique says his team may have lost their fear factor ahead of the first leg at Etihad Stadium. Check out what he thinks in the clip above.

City's defender Pablo Zabaleta has said "It's important we stick to our game, that we go on the attack because we have attacking players," 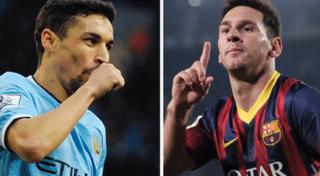 Of course Lionel Messi will be Barcelona's biggest threat but having just come back from injury some people are saying that he's still not back to full match fitness.

Brazilian forward Neymar will also be a major part of Barcelona's strikeforce after joining the spanish side in the summer for a reported £48.6 million.

Former Barcelona midfielder and now arguably one of Manchester City's most important players, Yaya Toure, will be looking to control things in midfield.

Spanish midfielder Jesus Navas is also hitting good form at the moment and could be a real danger to the Barca defence.