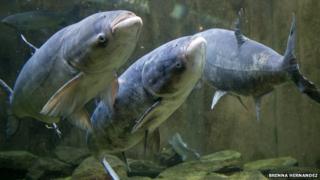 Giant jumping fish have taken over North America's Great Lakes and now authorities have vowed to stop them.

The Asian carp, which can measure more than a metre in length, originate in the far east.

The fish were introduced to the US around 30 years ago to eat up algae in sewage plants. But they escaped and bred, taking over lakes and waterways across the country.

The Asian carp have already made their way into the Mississippi River - which links with America's famous Great Lakes.

They've caused indigenous fish - fish that are originally from there - to move from their natural habitat.

A local environmental campaigner, Michael Beecham, described how scary the giant jumping fish can be: "I've gone down the river and had these fish jump up and hit me in the face. It is a big problem for our natural species." 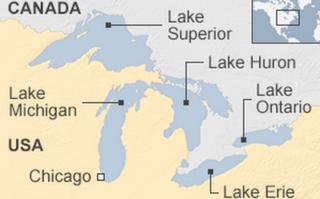 Now authorities in Chicago are worried the creatures will make their way into the city's canal system, so have drawn up a plan to stop them.

Plans include blocking part of the canal system so the fish can't get through, but this could take up to 25 years to complete.

Another cheaper option, not suggested by the Corps of Engineers report, is to eat the fish out of existence - by creating 'giant fish' burgers.

Dirk Fucik is selling carp burger at his specialist fish shop not far from downtown Chicago.

He tells me he thinks the carp are a great resource.

"To catch it and throw it away is a waste," he says. "Eating them helps solve the problem and also provides jobs."

But the idea has not yet caught on. So far, he is the only person in the whole of Chicago selling carp burgers.