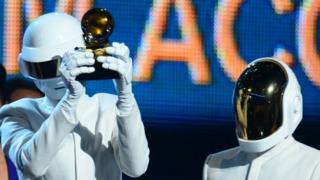 The head of music at Radio 1 and Radio 1Xtra has said streaming will soon be included in the top 40 singles chart.

George Ergatoudis said play counts from services like Spotify and YouTube could be included as soon as this summer.

Some countries such as the US and Germany already count music streams, but the UK chart is based on sales alone.

The Official Charts Company says there is no firm date set for the change.

Last year the most streamed song in the UK was Daft Punk's Get Lucky.

But it won't be straight forward as many people can't agree on what counts as one play when a track is streamed.

For example, if a track is played for just a few seconds should that count as a full play?

These details will have to be worked out before streamed tracks can enter the UK singles chart.

Streaming music is also controversial for some bands and music fans, as artists don't get paid the same as they would if the music was bought directly.