The Monkeys that drum to a beat 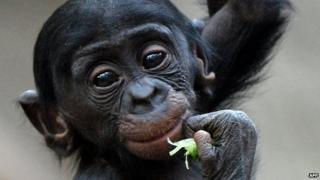 A recent study of bonobo monkeys shows they have an ability to match the tempo and beat of music.

Researchers designed a bonobo-friendly drum which was able to take the rough play of the monkeys.

The scientists then beat a drum of their own at roughly 280 beats per minute (bpm), double the number of the bpm of the average pop song.

The apes then picked up the beat and banged along using their own drum.

Related research on a rescued sea lion, which has no rhythmic ability, showed that with training, it could bob its head in time with music.