'No pound for independent Scotland will hit UK business' 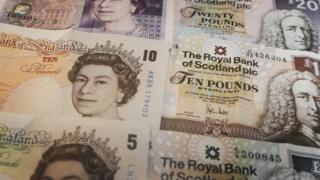 Scotland's First Minister, Alex Salmond, says that if an independent Scotland wasn't allowed to use the pound, it would hurt other UK businesses.

On 18 September people living in Scotland will decide whether it should be a separate country.

Last week, the man in charge of money for the UK government, George Osborne said Scotland wouldn't be allowed to share the pound with the rest of the UK if they voted to be independent.

But Alex Salmond says that won't just harm business in Scotland, but in the rest of the UK as well.

The Scottish government want to keep sharing the pound with England, Wales and Northern Ireland.

They think that by using a different currency, it would cost UK companies more to do business with Scottish companies.

Mr Salmond said he had added up the costs to UK businesses and: "They run to many hundreds of millions of pounds."

He thinks this would mean they would do less business with each other. He's also written a letter to the Prime Minister David Cameron complaining about the decision to not let Scotland share the pound.

But a spokesman for the Prime Minister said: "Mr Salmond is very good at penning letters but not so good at answering questions."