Arsenal through to FA Cup quarter-finals 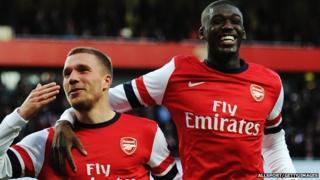 Arsenal are through to the FA Cup quarter-finals after beating Liverpool 2-1 at the Emirates on Sunday.

Alex Oxlade-Chamberlain scored one and set up the other for Lukas Podolski.

Steven Gerrard converted a penalty for Liverpool but they didn't manage to equalise.

The draw for the quarter-finals took place on Sunday. The ties will be played on 8/9 March.