The 25-year-old led after each of the four rounds, even setting a track record on her third run.

She finished a cool 0.97 seconds ahead of silver medallist Noelle Pikus-Pace from the United States. 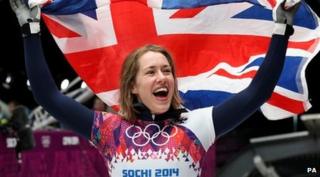 "It is unexplainable. I am sure it won't sink in for another few days," Lizzy said.

"I have worked so hard to get into this position and I am just so proud that my dreams have come true. I always have high expectations of myself."

Lizzy's gold is only Team GB's 10th in the history of the Winter Olympics.

Great Britain also won gold in the women's skeleton event at the last Winter Olympics in 2010.