How are the storms affecting you? Send us your pics and videos 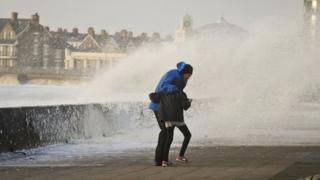 The UK has been battered by extreme weather yet again. There were fierce storms, heavy rain and strong winds on Friday - two days after 'wild Wednesday'.

Flooding continues to hit several parts of the country.

How is the severe weather affecting you? Have you been forced to leave your home because of the storms or flood water?

The wind blew our fence down and hit our neighbours car

We haven't been hit as bad as some people I have read about, but last night my fence got knocked down and dustbins were blown everywhere. On my street, another fence and a tree got knocked down.

My mum was going to get some petrol but the petrol station was closed because the roof had fallen down.

Last night it was very scary as the winds were so heavy and it felt as if the winds were shaking the house. When we woke up, we went downstairs and the fence outside was nearly completely blown over.

I go to school in Staines and the Prime Minister came to visit the area.

The river is very high in town, the performance area in the Oracle is completely under water!

Our stream flooded and it was taller than my dad!

My school has been flooded, half of the playground and all of the quiet area, so we struggle playing.

The river is almost bursting its banks and most of the road is flooded. It's raining really heavily and it's really windy too.

Our class could not go swimming because the road was flooded and the traffic was miles long.

My front gate has broken and my fence in the back garden has bent back. Also we had a power cut between 5-7pm.

On Friday half the class couldn't get in and my village was almost like a river! It was kind of scary.

My back garden is flooded and is slowly rising.

My mum has to walk to school because of flooding closing the roads.

There was a storm last night and I had to walk in it. I got soaked and the wind pushed me into mud.

It was scary when the power went off at 6:12pm.

The electricity went out this morning. It's been raining quite a lot but I don't live near the coast so it's not too bad. I've seen places on the news that are a lot worse.

When I went to bed last night the wind was so strong I couldn't sleep.