Murray through to second round in Rotterdam 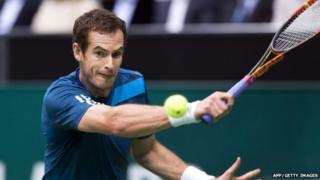 Andy Murray is through to the second round of the ABN Amro world tennis tournament in Rotterdam.

It took him one hour 29 minutes to finish up.

Murray, who has slipped to number six in the world rankings following back surgery, reached the Australian Open quarter-finals in January.

He accepted a late wildcard to play in Rotterdam after helping Great Britain beat United States in the Davis Cup.