What is groundwater and why isn't it running away?

Experts are warning that flooding in large parts of southern England and in some areas of Wales, could last for months - because the groundwater is so high.

But what does this mean?

Well, Newsround asked a groundwater expert to explain it to us.

Emily Crane works for the British Geological Survey (BGS) - an organisation made up of Earth scientists such as geologists.

Emily says: "The weather forecasts suggest we still have more rain to come, which means that groundwater levels could rise further before they start to fall again. This would not be good news for people struggling with flooded houses, roads, farms and so on."

Groundwater is found deep underground absorbed in rocks and held in the spaces between them.

When it rains any water that isn't used up in rivers or by plants and trees, continues its journey downward to rock layers beneath the soil.

This is where it becomes groundwater.

The Environment Agency describes groundwater as the 'largest available reservoir of fresh water'.

How can groundwater cause flooding?

When it rains too much the groundwater can rise until it reaches the surface.

This tends to happen when there is a lot of rain over a long period of time. 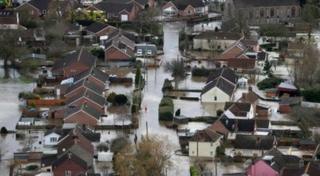 Basically the reserves deep underground become too full and the surrounding rivers, trees and plants don't absorb it fast enough.

This leads to water coming up into rivers making them overflow, it gets pushed up through natural springs and it comes up through the land too.

Where does groundwater surface?

Often when people talk of groundwater flooding they are describing the water that has been pushed up through the land.

This happens where the rocks are able to pass water - these kind of rocks are called 'aquifers' and they are described as 'permeable'.

This basically means they are rocks that can easily pass water through them.