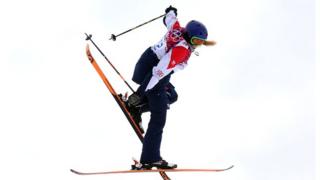 Britain's Katie Summerhayles has missed out on a medal in the final of the women's snowboard slopestyle.

Hopes were high for the 18 year old as she finished third in her qualifier.

But she fell on her first run, and then lost points for putting her hands down on the second run.

In the end Canadian Dara Howell took the gold medal. If Summerhayes had got a medal it would have been GB's second of the games so far.