Guide: Why is the flooding happening? 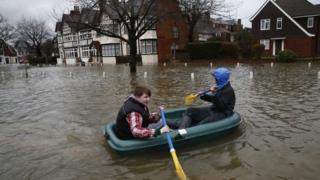 The past couple of months in the UK have been wild; there's been downpours, tidal surges, mass flooding, high-speed winds and snow too.

So, what's going on?

Well, the Met Office - the weather and climate centre in charge of forecasts - says this is because the country has been hit by a series of storms, one after another.

The storms have been brought into the UK by the jet stream.

What is the jet stream?

The jet stream is made up of of ribbons of very strong winds which move weather systems around the globe.

Jet streams are found between 9 kilometres and 16 km above the surface of the Earth, and can reach speeds of 200 miles per hour.

The UK's weather is pretty much ruled by the jet stream. It is driven by temperature differences between cold air to the north and warm air to the south.

This winter the difference between the hot and the cold temperatures has been pretty big, and this has made it really strong with lots of changes in it.

When changes happen inside the jet stream this can lead to storms; the faster the jet stream, the bigger the changes, and that results in a whole band of storms hitting the UK one after the other. 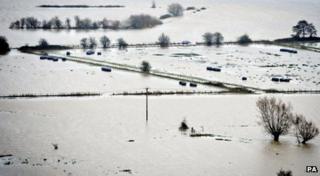 The storms started in early December with high winds and tidal surges in the north of England and Scotland. Scotland's rail network shut down, 100,000 homes were left without power and there was travel chaos.

Over the Christmas holidays it got much worse for more areas of the country. The downpours and high winds caused widespread flooding across southern England, including Dorset, Hampshire, Surrey and Kent. Around 50,000 homes had power cuts.

This continued throughout December and parts of Wales was hit too - the River Nith burst its banks, followed by the River Severn in Gloucestershire and sections of the River Thames. By this point the Somerset Levels were underwater too. 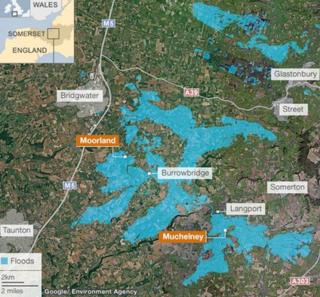 Google/Environment Agency
The Somerset Levels is one of the worst-hit areas. Some villages have been cut off by the surrounding water for weeks - the only way in and out is by boat.

Throughout January steady rainfall and high tides have lead to more flooding in some areas because the ground is saturated and rivers are already overflowing.

In February, the two longest rivers in the UK - the Severn and the Thames burst their banks in other areas too.

Is this the worst it's ever been?

The Met Office says December was arguably the stormiest month since January 1993, and parts of England have had their wettest January in 250 years!

The Environment Agency say that if the weather carries on like it has been, it could be the wettest winter in 250 years.

Jacob Cope, forecaster at the BBC Weather Centre, says the winter storms haven't been any stronger than others in recent years - but it seems worse because we have had several big ones in a short space of time.

When will it end?

Unfortunately forecasters say there's another storm on its way.

They say parts of the UK could get gusts of wind of up to 80 mph from Wednesday along with heavy downpours straight through to the weekend.

There's likely to be snow on higher ground too, like in the Pennines, and across the midlands.