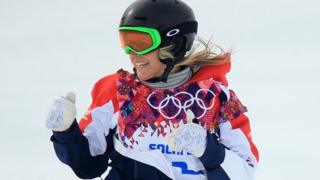 Jenny Jones has won Team GB's first medal at the Winter Olympics in Sochi after a superb run in the women's snowboard slopestyle event earning her a bronze.

And what's more it's also Great Britain's first ever Winter Olympics medal on the snow.

Her score of 87.25 briefly put her top of the standings but she was overtaken by Finland's Enni Rukajarvi (92.50), who took silver, and gold medallist Jamie Anderson (95.25).

Jenny has spent almost 15 years as a leading pro snowboarder, but this is the first time her event has been included at an Olympic Games.

She won a World Cup silver medal earlier in the season but spent time out of action with concussion at the end of 2013.