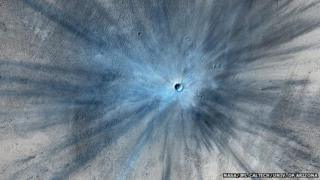 It looks like a paint bomb has crash-landed with the surface of Mars creating a splatter effect...

But Nasa says it's the effect of a meteorite hitting the surface of the planet.

A Nasa spacecraft which is orbiting the planet when it spotted the new crater.

The hole is about 30m (100ft) in diameter, and it's surrounded by a blast zone of debris punched out of the ground by the meteorite impact.

The explosion that caused it was powerful enough to toss out debris as far as 15km (9.3 miles) away!

The image was taken by the Mars Reconnaissance Orbiter's HiRise camera.