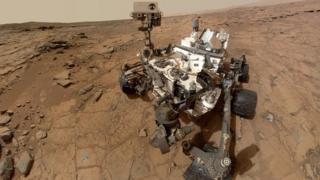 The Curiosity Mars rover is going to try and drive over a one-metre-high sand dune on Mars.

The dune is stopping the rover get to a valley which doesn't have many sharp rocks that can damage the robot's wheels.

It's a risky business, NASA scientists lost an earlier rover in sand back in 2009!

This time Curiosity will first only climb halfway up the dune to see how it reacts to the sand.

The rover has been on Mars since August 2012.

Pictures NASA recently took show it's metal wheels have been damaged by sharp stones that lie on Mars' surface.

Normally it would be easy for the rover to climb up the dune.

But scientists are worried that the sand dune it's going to try and get over might have stones hidden inside, which could cause more damage.