Comments: Your questions for Laura Trott and Jason Kenny 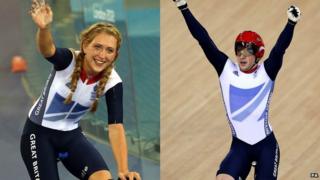 British cycling Olympic gold medallists Laura Trott and Jason Kenny are speaking to Newsround and we want your questions for them.

Laura, who won Olympic gold at the 2012 Games in the omnium and team pursuit, was also awarded an OBE in 2013 for her services to cycling.

Jason is a veteran of two Olympics winning a gold and silver medal at the 2008 Beijing Olympics and two gold medals at the 2012 Olympics.

What do you want to know from two of Britain's best cyclists?

Your questions for Laura Trott and Jason Kenny

Do you want to know how they got into cycling? Or what it takes to win a gold medal?

Thank you for sending us your questions. This chat page is now closed.

We may show your comment on this page or in our bulletins on the CBBC channel. We'll show your first name and which town you're from - but we won't use your details for anything else.