One Direction Harry 'not as smart as sister' 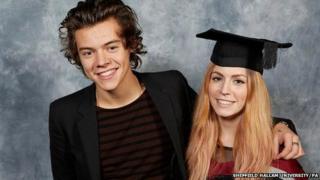 He may have the boyband voice and that dreamy trademark hair - but One Direction star Harry is not the brightest in the Styles family.

Harry's dad Des revealed on Twitter that Harry's sister Gemma is top of the roost.

He wrote: "Gemma is the clever one of us all."

The pop star's Dad said: "The boy might be famous but the girl is the brains of the family!"

Harry himself described his sister as "annoyingly clever", adding "I'm so proud of you."