Chelsea first to beat Man City at home this season 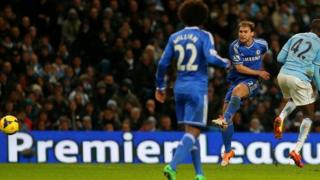 Chelsea have become the first team to beat Manchester City at home in the Premier League.

Jose Mourinho's team scored the only goal of the game in the first half through defender Branislav Ivanovic.

Loads of people had expected Chelsea to defend - instead they hit the woodwork three times.

If City had won, they would have climbed to the top of the Premier League table, instead Chelsea are now only two points off leaders Arsenal.